BE THE FIRST TO KNOW

Subscribe newsletter to receive timely updates from your favorite products. 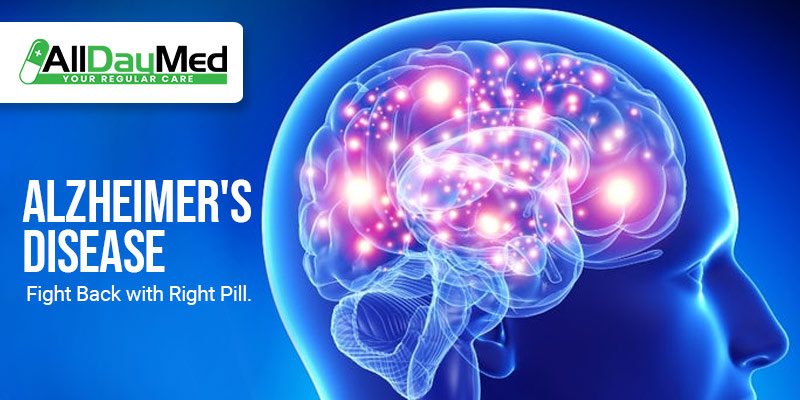 Alzheimer's disease (AD) is a slow and progressive disease of the nervous system for which there is no cure, and the eventual outcome is death. The illness destroys the nerve cells and the connections between the cells resulting in dementia (senility), physical and emotional decline.

Over the course of the disease, patients experience extreme difficulty learning and remembering, mood swings, anxiety, and depression. In the later stages, patients become incapable of performing such simple tasks as bathing, feeding themselves, and even using the bathroom. In the end, patients are completely bedridden and mute, requiring 24-hour care.

Alzheimer's disease can last between five to twenty years from the time of the first symptoms until death. Any patient dealing with such disease can take Admenta 10 mg Tablet to treat this disease.

Alzheimer's disease is the fourth leading cause of death for adults and the most common cause of mental decline in the US, afflicting up to 4 million elderly persons. An estimated 50% of nursing home residents and nearly 50% of people over age 85 are affected by Alzheimer's disease. Although both sexes get AD, the illness is more likely to strike women. Every race and ethnic group suffers from AD, but some are at greater risk for the disease than others are. For instance, Black Americans have four times the risk as Whites, and Non-white Hispanic Americans have twice the risk. The populations least affected by Alzheimer's are Native Americans and Southeast Asians.

Although much has been revealed about Alzheimer's in the last decade or so, the exact cause of the disease remains a mystery. However, recent studies may help explain how brain failure occurs in later life. Researchers have identified a certain variation of the gene ApoE4 as a possible risk factor for the disease. ApoE4 may also contribute to early onset (before age 60)

Research on treatment options for AD has exploded in recent years. Researchers are exploring the use of anti-inflammatory drugs like  Admenta 10 mg Tablet, vitamin E, and the memory herb ginkgo biloba, as treatments that might help delay the progression of Alzheimer's disease or prevent it all together. There has also been considerable progress in controlling the behavioral and psychological problems common in Alzheimer's patients. Changes in the home environment can go far in reducing dangerous behaviors like wandering. Installing outside locks, limiting distractions, establishing predictable daily routines, and supervised exercise are all recommended.

At present, there are several pills The challenge of diagnosis is to determine whether the patient may be experiencing dementia from other causes. A detailed history of the patient's symptoms and how they came about provide the best clues to whether they have Alzheimer's disease or some other illness. A close family member who is familiar with the patient's medical history can be very helpful in this discovery process.

Admenta 10 mg Tablet is a medicine used in the treatment of Alzheimer's disease. It helps to slow down the progression of moderate to severe Alzheimer's. For more info visit our site.